Universal Declaration of Human Rights (1948) Article 26 provisioned everyone has the right to education, free elementary and fundamental education; elementary education shall be compulsory and education for full development of human personality, strengthen human rights, fundamental freedoms respect and parents right to choose the kind of education for children. As per articles 13 of the International Covenant on Economic, Social and Cultural Rights (1966) there should be compulsory and free primary education to all; fundamental education for persons uncompleted primary education. Article 28, the Convention on the Rights of the Child (1989) highlighted free and compulsory primary education to all, regular attendance and reduction of drop-out. Similarly, the Convention against Discrimination in Education (1960) stressed discrimination nullifies equality in education (access and quality). So, it shall not be considered.

Therefore, based on above international provisions Nepal had also made its commitments towards education rights of children in different international forums. Nepal has also developed various acts, policies, regulation, and guideline and implemented it to fulfill such commitments. According to EFA 2004-2009 Core Document, everyone receives an education of good quality, ensured by legal provisions, each child (6-10) access to and completion of free and compulsory quality basic and primary education and respective to gender, ethnicity, religion, disability, and geographic location. The country’s 10th plan 2002-2007 highlighted education as a key way to reduce poverty and National Plan of Action for EFA (2001-2015) focused on the achievement of universal primary education by the year 2015. Similarly, SSRP (2009-2015) concentrated on equitable access to quality education (for all children between 4 and 16 years) through right based approach, promotion of a child friendly environment in schools’ and creating ‘equitable participation in basic education’. The three-year interim plan (2007-2010) talked about basic education provided in mother tongue and the constitution of Nepal (2017) provisioned “Every citizen shall have the right of access to basic education” in article 31(1). Similarly, constitution ensured the rights of every citizen to get compulsory and free education up to the basic level and free education up to the secondary level from the State”.

In this regards, School Sector Reform Plan (2009-2015) of the government of Nepal has already completed right now. A remarkable progress has been achieved by government of Nepal in the net enrollment rate for primary education i.e. 96.2 percent. Similarly, gender parity index of primary level has been already reached with 0.99 (Department of Education, Flash Report, 2014/2015). It is claiming that only 3.8% of children are out of school right now.

However, according to CBS (2011), it was found that the percentage of out of school children was 27.7% in Dhanusha and they are especially from marginalized community, girls, Terai Dalit and children with disabilities from the age group 4-16 (covering ECED to class 10). It is very high compared to national status, 14.9 percent (UNICEF, 2013). It means, Government of Nepal fails to ensure the education rights of girls, Terai Dalit and children with disability in spite of making considerable progress in education planning, leading to significant improvements in enrollment, early childhood development, and gender parity at primary level (SSRP extension plan 2014/2015-2015/2016). The percentage of high out of school children are especially in 8 districts of central terai likewise Siraha (25.1%), Saptari (22.7%), Dhanusha(27.7%), Mahottari (31.2%), Sarlahi (32.3%), Rautahat (36.9%), Bara (26%) and Parsa (25.4%).

The main causes of the existing poor educational status mentioned above in Terai districts are mainly:

Given such traditions, large numbers of people in the country, especially in terai are deprived of their educational rights and thus have remained unable to make their life better and secured. Some interventions to achieve equity in education have gone some way to addressing inequalities. However, equity in education (especially mainstreaming out of school girls into education system) remains a constant challenge in education especially in Terai districts of Nepal. Finally, girls, children with disability, children from Dalit communities are facing multiples exclusion in education being a girl, Dalits and disability in terms of access to education, retention, participation, and success. They become a challenged learner in this area.

In this regards, here, LIFE realized that out of school children, especially girls (Mushar, Satar, Majhi, Dom, Chamar, Dhangar and Muslim communities), children from dalit communities, children with disability should be targeted and mainstreamed into the education system especially in these Terai districts.

Hence, following the spirit of educating out of girls’ school, LIFE in partnership of DEO (District Education Office), Dhanusha under the support of UNICEF, implemented “Girl Access to Education (GATE)” program in Dhanusha district since January 2014. 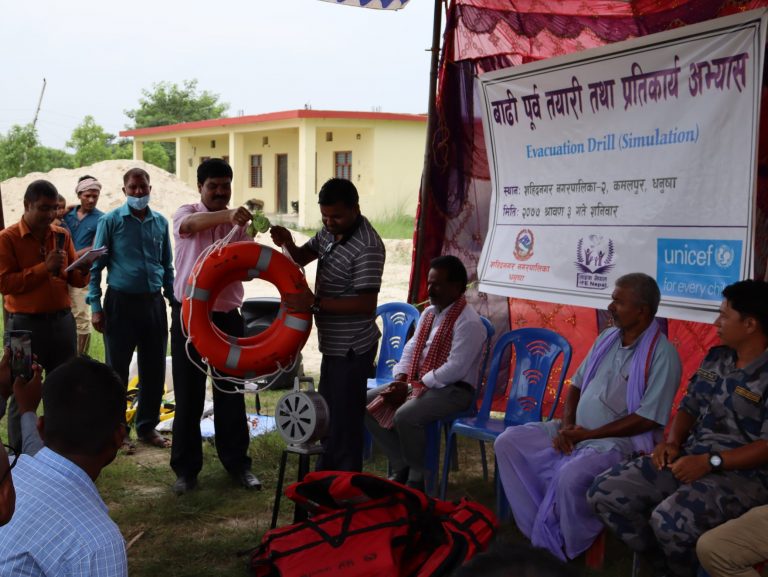 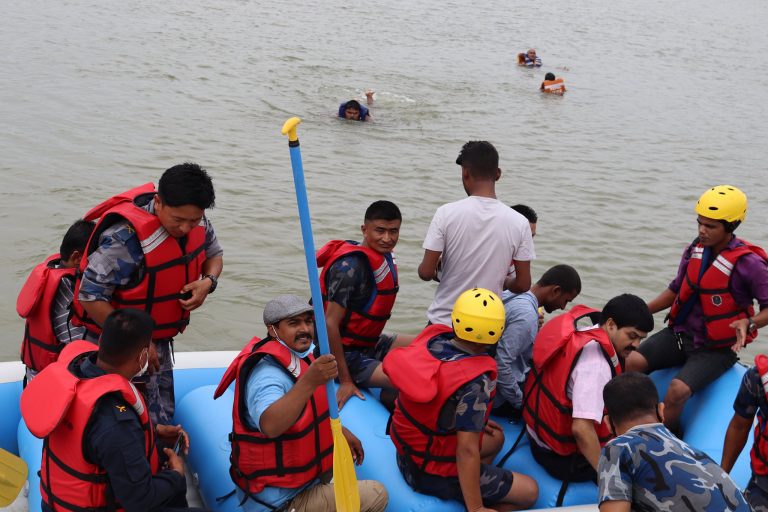 LIFE Nepal with the technical and financial assistance of UNICEF organized a simulation on flood in Sahidnagar Municipality of Dhanusha.

Let us know your thoughts